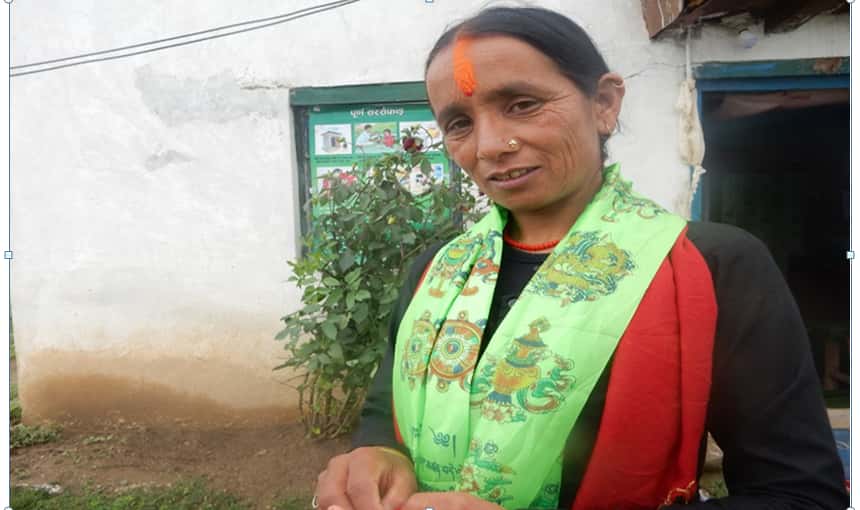 Dana Neupane is from Palanta Rural Municipality-1 Khada (previously Dhaulagoha-6) Kalikot. These days, she spends most of her time at her office fulfilling the responsibility as it was given by the people. Holding the position of Vice-Chairperson of Palata Rural Municipality has been a remarkable achievement in her life so far. She was elected as the Vice-Chairperson the Palata RM in the Local Election 2074 BS (2017). People trusted her due to her strong leadership and active engagement in the social activities concerning with the betterment of the society.

Unlike today, her life was completely different compared today few years back. She used to spend entire time in household activities. It takes almost three days walk to her village from the district headquarter, Manma which is around 65 km away. Barren landscape that makes almost impossible for farming and persistent shortage of drinking water is so common throughout the year at her village. Living with seven family members dealing with daily meals from the agricultural activity in the village used to be almost impossible resulting food shortage for almost 8 months in her family. Hence, her husband was compelled to go India for searching for daily wages work there with the hope of fulfilling basic needs of the family like clothing, food and others; whereas she used to work in daily wages available in the village from the some developmental activities carried out by the development organizations.

Meanwhile, her desire of getting education could not be fulfilled due to deeply rooted socio-cultural and poverty in the family. That barred for her going school during her childhood while being at parental house. Instead, she had to remain busy in household activities which continued even after her early age marriage. But her dream of being able to read and write was still in her mind because she had realized that education can lead to better livelihood in life as it provides opportunities to be engaged in income generation activities because basically one has to be able to calculate, read and write. She had to use thumbprint as signature and most importantly she used to be completely unknown what is written in the documents. That used to make her so uncomfortable. Leading social activities of the community was also one of the dreams. Hence, she was waiting for the right opportunity to come.

Mission East and KIRDARC Nepal together implemented the project, Rooting out Poverty: Rights and Opportunities for women in Karnali (SABAL) from February 2016 in Kalikot district.

Ganesh SABAL Kendra was formed in her village; in which, she became one of the members. She asserts, “Education is very essential for carrying every task these days. If anyone is deprived of it, then, s/he has to face several challenges in life. Hence, I realized my past difficulties being an illiterate and actively took part in SABAL class.” For her, joining at the Kendra was the turning point of life. She adds, “After joining in the class, I was determined to transform myself in a leadership role in the society. With this aim, I became literate from the classes provided at the SABAL Kendra where I was a member. Now, I am very pleased for being literate and most importantly to be the Vice-Chairperson of Palata RM because it has helped me in both ways explore learning and make contribution for the society; especially, women in the society.” These days, she is quite determined to educate the women of her local level by continuing SABAL Kendra and encourage them to come out of household chores. “This confidence and determination would not have been in me if there was not SABAL Kendra. We learned about life skills and measures of eliminating social malpractice prevalent in our society”, she adds. Either learning to read or developing leadership capability in her; she was active showing the keen interest in every aspect since early days of joining the Kendra. Gradually, members of the Kendra and community people began towards her commitment.

As local level election 2074 as edging closer, her dedication was closely observed by the party (then, Maoist Center). As a result, she was able to a candidate representing the party. But her visions were not limited with the party rather she was more concerned with uplifting the standard of people at all aspects of the local level; especially, educating women and empowering them. She won the election evidently representing the aspiration of women and marginalized communities. She remembers that regular orientations and trainings provided from the Kendra on social issues and entrepreneurship made her more confident.

After resuming office, she has been assertive for eliminating social malpractices i.e. chhaupadi, untouchability, domestic violence, child labor, child marriage, alcoholism, gambling along with eradicating Illiteracy, unemployment, food insecurity and malnutrition by prioritizing in the plans and strategies of the local government.

Now, she is so satisfied with the changes that she has brought so far. Once being illiterate and completely lost in household activities then being into a leadership level at local government is her greatest achievement. Going through all sorts of these problems in the past has made her so engaged for eliminating them. She has been exemplary in the district for women empowerment.