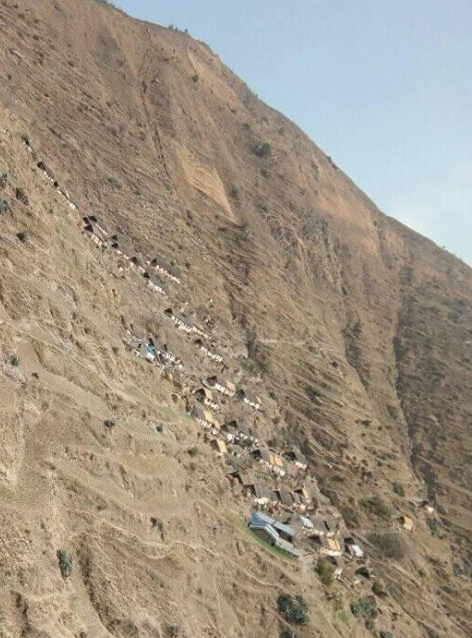 Palanta Rural Municipality-1 Khada is one of the remote areas of Kalikot district. It is located at about 67 km west from Manma, the district headquarters. Scarcity of drinking water and water for hygiene and sanitation had been very severe problem in the village. All houses are thatched with straw and the settlement is very dense in steep land. The total household in the community are 170. All the HHs were engulfed on fire on

December 24, 2018 which made significant loss of of property. 32 houses were completely burnt and 7 people were wounded.132 people (56 female and 76 male) including 23 school going children (15 girls and 8 boys direct affected from the community), are forced to live in a camp near by affected village (in the beginning at school now neighbour house). The total of 21 HHs toilet was completely destructed and population of those HHS forced to do open defecation as well as using shared toilet. The source of water is limited and unprotected and not regular supplied from the previous system due to burnt pipes during the incident. They have to queue for water fetching in the community tap and some people have to walk down the village 15-20 minute one way for drinking water. School children are deprived from sufficient drinking water and use sanitation facilities as due to disruption of water service due to fire caught. Most of them are doing open defecation around the school and community. Maintaining hygiene and sanitation was very challenging as the source of water been very limited since the past.The desperate need of safe drinking water along with water for hygiene and sanitation was fulfilled after the support from KIRDARC Nepal and Mission East. The key changes in the community after KIRDARC support.

“It has become easier for us these days unlike the past. It became possible by KIRDARC Nepal and Mission East in the village. We got 4 hilltank (water tank) as well as water pipe for restoring it that was destroyed by the fire.Then after, it became easy for us to store water that was collected from tap water. We are very pleased with the support as it helped for community and school for quenching the thirst of villagers and students. Not only that, we also get hygiene kits from KIRDARC Nepal. I believe that KIRDARC Nepal is the only NGO who distributed the relief materials that were based on hygiene and sanitation in transparent manner. Additionally, awareness was made to us regarding proper use of hygiene kits, aqua-taps that were provided to us. Iam very thankful to KIRDARC and Mission East and hope to have more support further in reconstruction of the village in coming days.” Mukti Neupane, Khada 1, palanta