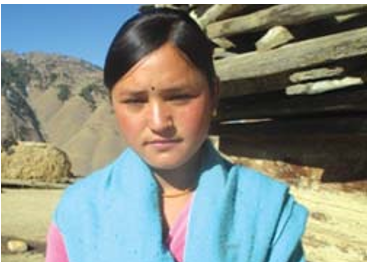 Malati is an 18 years old school going girl, studying in class 10 in Kalika Secondary School, Badki of Jumla district. Malati not only goes to school rather she works in field, cooks food for family and collect water in normal days. But, in the society and in her family there is superstitious belief that if women/ girls enters inside the home and touch anything at the time of menstruation, God will get angry so they are never allowed to enter inside the home and touch anything.

Similarly, she said that, “most of the menstruation related issues like personal hygiene, food taboos, and social exclusion during menstruation have been clarified after menstruation hygiene management training conducted by KIRDARC Nepal with financial support from Water Aid Nepal. It was very beneficial and helpful for maintaining the menstruation period hygienically which will keep healthily throughout my life. I have been aware that different nutritious food is necessary during menstruation period. Due to food taboos, and other myths, superstitions related to menstruation which are prevalent in most of our society and which are also deeply rooted in our mind, had created barriers in establishing the healthful and civilized society. I became aware that the menstruating is normal process and each and every female have to be. I am also unaware and have no idea of using sanitary pad and I always used unhygienic piece of cloth during menstruation period consequently I had been victim of scabies infestation, itching symptoms in lower (genital) part, urine burning (might be urinary tract infection).Now the MHM training provided me helpful knowledge and skills to make sanitary pads which leads women and girls of menstruating period to stay clean and healthy. Today I am more confident and feel no any hesitation during menstruation period which leads me to attend classes regularly in school nowadays.”

After getting training on menstruation hygiene management, gaining knowledge, idea on Menstruation as the natural cycle, it has nothing to do with any other bad thing and, she not only convinced her family rather community people. Now, in her community, they used to listen to her interestingly and she always trying to do more clarification on myths, superstition regarding menstruation. They became more positive towards her and they are trying to bring expected healthful behaviors like providing nutritious food, maintaining personal hygiene and discouraging animal shed for sleeping during menstruation.

Today, Malati is a happy girl. She is a regular in school and is excelling in her studies. She remains present during her menstrual days also. She does not miss her classes and during her free time, she plays with her friends, takes part in extracurricular activities.

Like Malati, many other girls of her school who have reached their puberty, do not hesitate to come to school during these days.