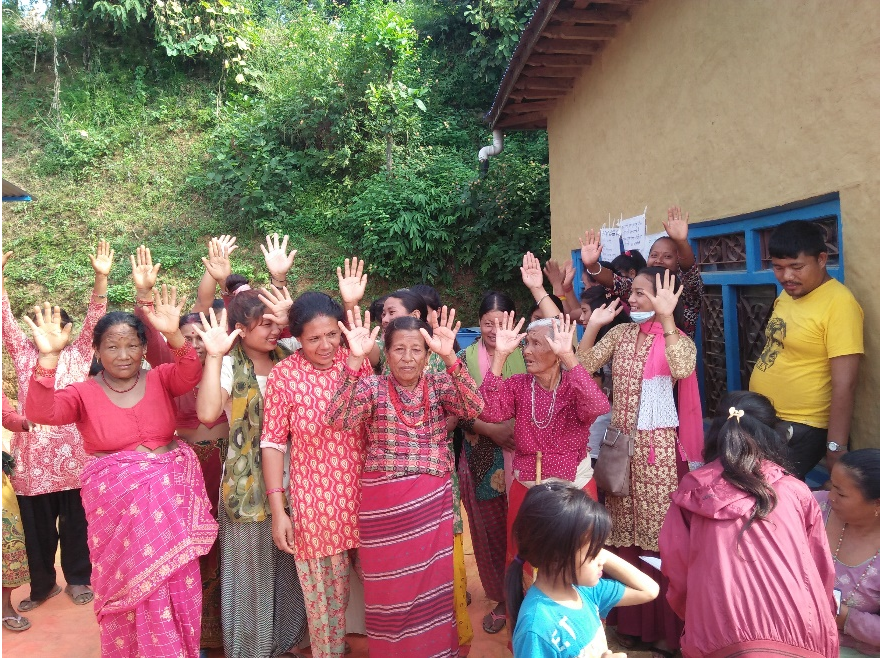 S hikhar Kateri-11 is located in the distance of 8 km from Panchkhal Municipality Office, Kavre. It is one of the hard hit communities from April 25th earthquake, 2015. From the devastation, more than 90% houses were completely destroyed. Not only that, sources of drinking water and infrastructure of sanitation were also destroyed or damaged. Before earthquake, 15% households had toilet facility but 90% of them were damaged the quake resulting people had no option other than going in open place for defecation. Access of safe drinking water was not reality rather they had to wait hours fetching a bucket of water that was not safe to drink. 83% of local people used to drink water without filtering and only 2% people used to drink water after filtering water.

With the aim of establishing complete sanitation by ensuring 5+1 indicators by improving WASH condition at Shikhar Kateri, KIRDARC Nepal implemented the project “Ensuring Sustainable Access to WASH services” with the support from Water Aid Nepal. In the first phase Ward Sanitation Coordination Committee led for the project implementation for generating awareness for constructing toilet in each house, and providing the support for constructing toilet in the earthquake affected houses based on the policy made to the earthquake affected communities.

C onstruction of toilet could not get pace due to deeply rooted traditional practice. But gradually, from the support in the campaign by Ward Office and being aware, people started to construct toilet. 18 week sanitation promotion related educational campaign to men and women was run at individual, familial, community level including environment and menstruation hygiene as well. In which, materials were distributed that were necessary for washing hand using soap by applying the 5+1 steps of hand washing approach. Regular campaigns for generating awareness were run for sanitation, safe and sufficient drinking water. For the sustainability of the campaign, improvement was made possible on resilient drinking water, sanitation and hygiene under the leadership of Ward Sanitation Committee and cooperation from Ward Sanitation Coordination Committee, Water User Group, Disaster Rescue Committee, Drinking Water Safety Committee, and Community Sanitation Committee by organizing regular meeting, unified monitoring, discussion, interaction, seminar and radio program.

Mahadevstahan Shikhar Kateri drinking water lifting, sanitation and hygiene project was completed by prioritizing Sustainable Development Goals, assimilating one house one tap objective, following the basis of four principles of Sendai Framework regarding disaster risk reduction, including government of Nepal’s 9 characteristics for resilient community, and incorporating 6 WASH resilient unified by KIRDARC Nepal and WaterAid Nepal. This initiative has assimilated approach one house one tap of government of Nepal. In which, community had brought necessary materials and also it had contributed for 20% to 25% for construction. Since the water was distributed in lifting process, Nepal Electricity Authority, Banepa branch had supported for making availability of electricity as per the estimation. Commitment has been made from Ward by allocating budget as per the need for repair and disaster risk reduction.

Prior to the project commencement, unified action plan was made along with the identifying possible risks and measures from water sources to households with the participation of community. All the committees remained active to materialize the action plans. Monthly charge for drinking water consumption has been managed based on the meter system; meanwhile, human resources (a man and a woman) have also been recruited for maintenance of the scheme. They have received three day training on drinking water management.

Shiv Sharan Lama, Ward Chairperson, Panchkhal Municipality-11 asserts, “Visible changes have been observed in the community after the campaign in the Ward run by KIRDAR Nepal. Others stakeholders have to follow the initiated campaign and contribution made by the organization in drinking water, sanitation and hygiene.” Prem Ghatani, Treasurer, Mahadevsthan Water User Group considers, “Previously, this community was in poor condition but now it has been well maintained in sanitation and hygiene”. The community has achieved the following 6 indicators from the consolidated efforts over the year in resilient WASH with the aim of reducing the effects of natural risks and keeping the project sustainable