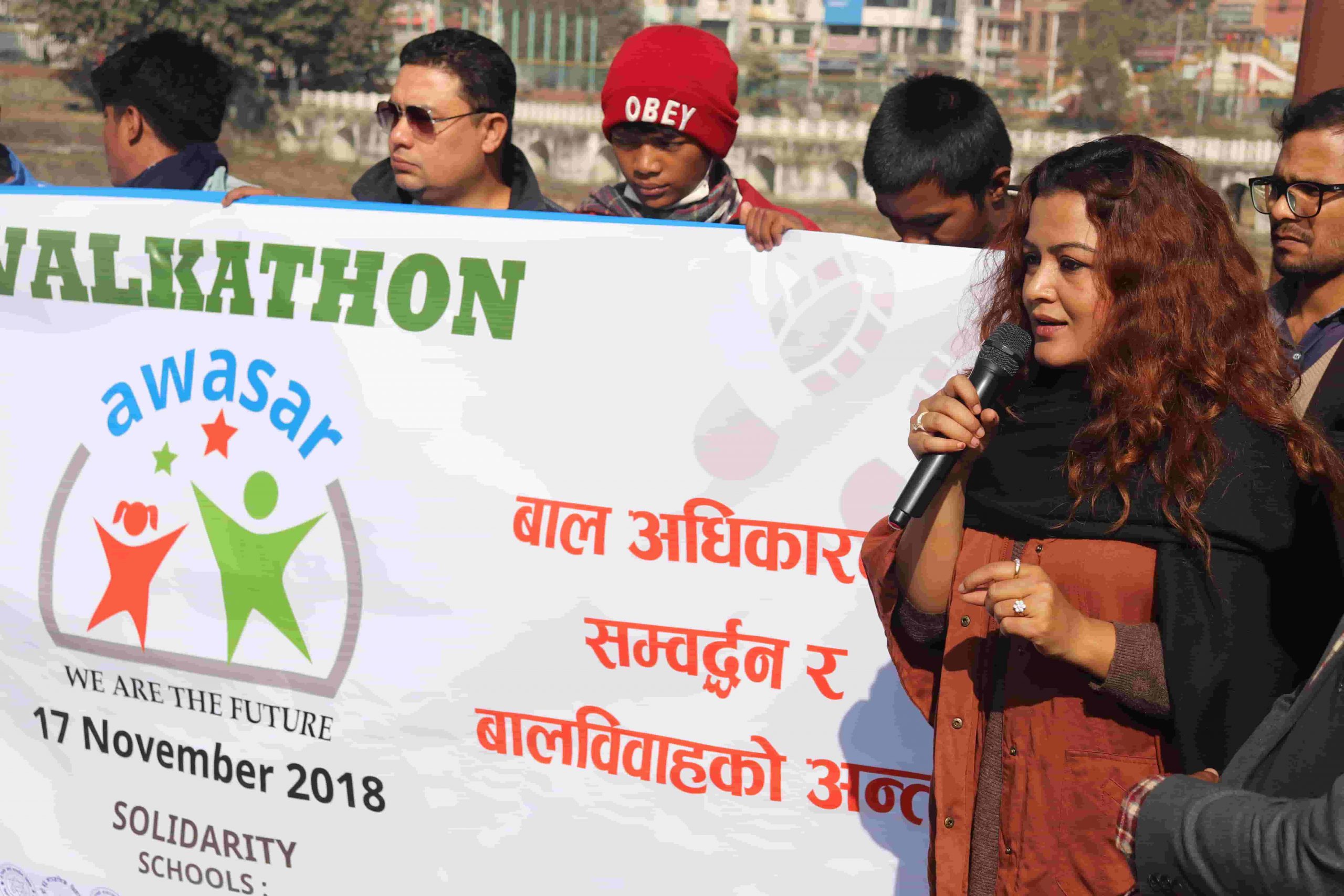 Walkathon was organized on 17th November, 2018 marking the World Child Rights Day. The walkathon started from Bhrikutimandap and culminated at Ratnapark, Shantibatika Kathmandu. Rekha Thapa, Actress and Child Right Activist was the brand ambassador of the Walkathon. The
program was organized under the slogan of “We are the Future: Promoting Child Right and Eliminating Child Marriage” as to promote child rights and end child marriage.

Hundreds of participants representing stakeholders working for child rights that include child rights activists, civil society organizations, academicians, journalists, youth clubs and networks, children, teachers gathered with placards and banners. Participants took part showing their solidarity for ensuring child rights in the country and also end children marriage. The banner and placards with the slogan of child protection issues along with disseminate the importance of child rights with zero tolerance towards child abuse, exploitation and neglect.

The walkathon marched peacefully with placards with slogans with the aim of delivering the messages. Those messages include no child labor, send children at school, love and listen children, be responsible on child right, end child marriage, all forms of governments have to be ensure child
rights though policies and provisions, child marriage is a social evil, marriage only after 20 years of age, protect and promote child rights by all, effectively implement school as the zone of peace, no corporal punishment, end any forms of discriminations to children, ensure child friendly environment at home and school, child marriage is child abuse, child-friendly governance is respect to the child right, end gender based discrimination (girl and boy) written in the placards and banners that were held by the participants throughout the walkathon.

A participant in the walkathon, Bipana Buda Magar, Child Network Mayagdi shared asserted concern of child marriage that has affected health and future of child and family in general. Such kind of campaigns could help for generating awareness to end child marriage. Child marriage is social evil as it affects both physically and mentally to the children; hence, perfect age for marriage is after 20 as provisioned in the laws. Contribution from the CSO community by organizing the programs for initiating the campaign of eliminating child marriage and promote child rights. Despite carrying out different programs, child marriage has not been reduced as per the plan. Use technology and social networking sites by children or teens have to be made in positive or creative aspects so that they could maximize their use for better life.

Krishna Chandra Acharya, National Child Protection Network considered that taking part in the campaign has been one of the solidarity campaigns form the network. This initiation is very essential for creating awareness against child marriage as it has been national problem. CSO community has been very vocal for being watchdog to the government for ensuring child rights. This community is also active in the community for eliminating social evils concerning with children.

Krishna Gautam, representative of NGO Federation, Nepal also committed his solidarity to the campaign. Women rights and child rights have been mostly violated in the country. Most of cases in the courts are related to children and women. Hence, there is urgent need of working against those violations concerning with children. Despite ratifying different international laws related child rights and ensuring the child rights in the constitution under fundamental rights, practice has not been that much satisfactory. Hence, further initiations have to be made by all the concerned stakeholders. Evidently, more than 6000 NGOs across the country are directly or indirectly contributing for promoting and protecting child rights. NGO federation committed solidarity for the campaign as well.

The walkathon was completed with signing on the canvas by all the participants for showing solidarity or the campaign. Hundreds of participants signed committing themselves in the campaign in coming days as well from their respected places and positions. The walkathon was started at 9:00 am from Bhrikutimandap. Rally marched through Bhadrakali, Shahidgate, Bir Hospital and culminated at Shantibatika, Ratnapark at 10:30 am with all the participants committing themselves in this campaign of eliminating child marriage and protecting child rights in the country.