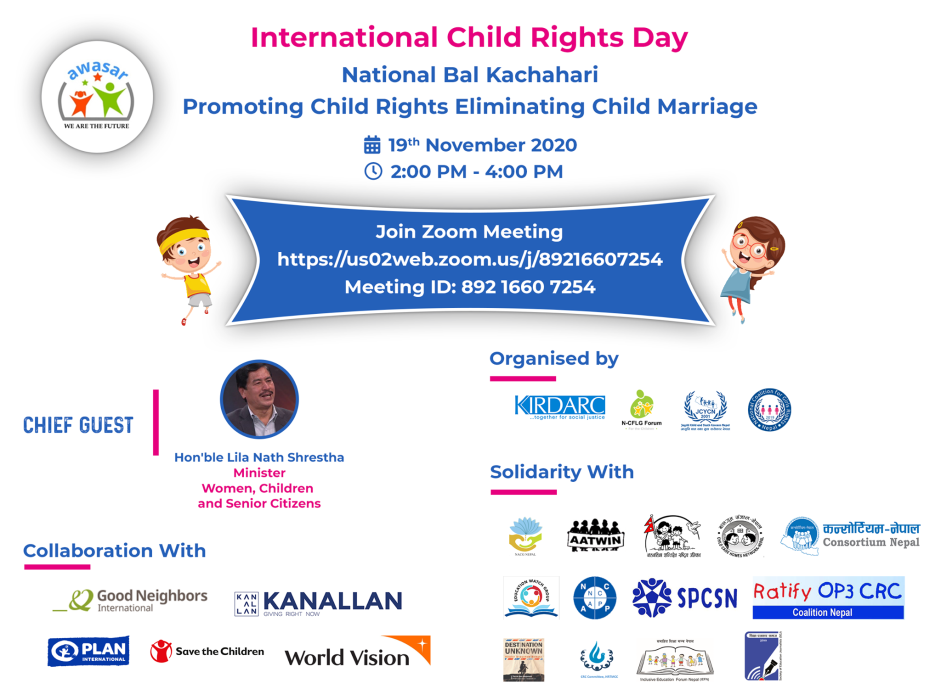 In the event two video clips were presented regarding past and present efforts and situation of child marriage and child rights. Even though many plans, acts, laws and effort to protect child rights are being carried out in Nepal, children are still facing problems like child marriage, rape, sexual and physical harassment, trafficking, kidnapping, and child labor. The children also shared their experience. One of them shared that when they try to stop the child marriages, they are threatened by the locals but they tolerate it and are determined to move forward.  They are trying to minimize violence against women but locals threaten them by saying, “you guys are from this village, you have no higher rank and have no knowledge, you don’t need to teach us, we are older than you, and we will kill you.”

Speakers highlighted that Government, CSO, and every individual should think about this issue. Issue of children should be prioritized as they are the future of our country. To eradicate child marriage by 2030, the government has come up with various tactics and strategies; national child right council has also formulated a 10 year plan to tackle this issue. Child helplines are there to take in the issues of children. This is a common issue and everyone should work together for this and should launch social campaigns for it. Cases like elopement of children through child clubs and councils can also be seen and children and the clubs should be aware about it and should tackle this issue as well. To minimize it, people should work together along with all 3 levels of government in every state and To minimize child marriage, the local government should properly monitor and evaluate the laws and rules and participation of children in various programs, also awareness programs in the community. All the stakeholders committed to work to end child marriage. Chief Guest, Women children and senior citizen, Honorable Lila Nath Shrestha stressed that implementation part of child marriage is weak while the policies are strong. He also highlighted the iniviatives of Government. The state 1 has declared to eradicate child marriage by 2082 BS while, the state 3 has declared to eradicate it by 2078 BS. In state 2, they are running a campaign called, “beti bachau, beti padhau”, through which they are trying to minimize child marriage. Similarly, the State of Far west is also conducting a campaign called “sanai chu ma padhna deu, baal bibaha haina padhna deu”.  He urged the different stakeholders to support in ending child marriage as government alone is not enough.