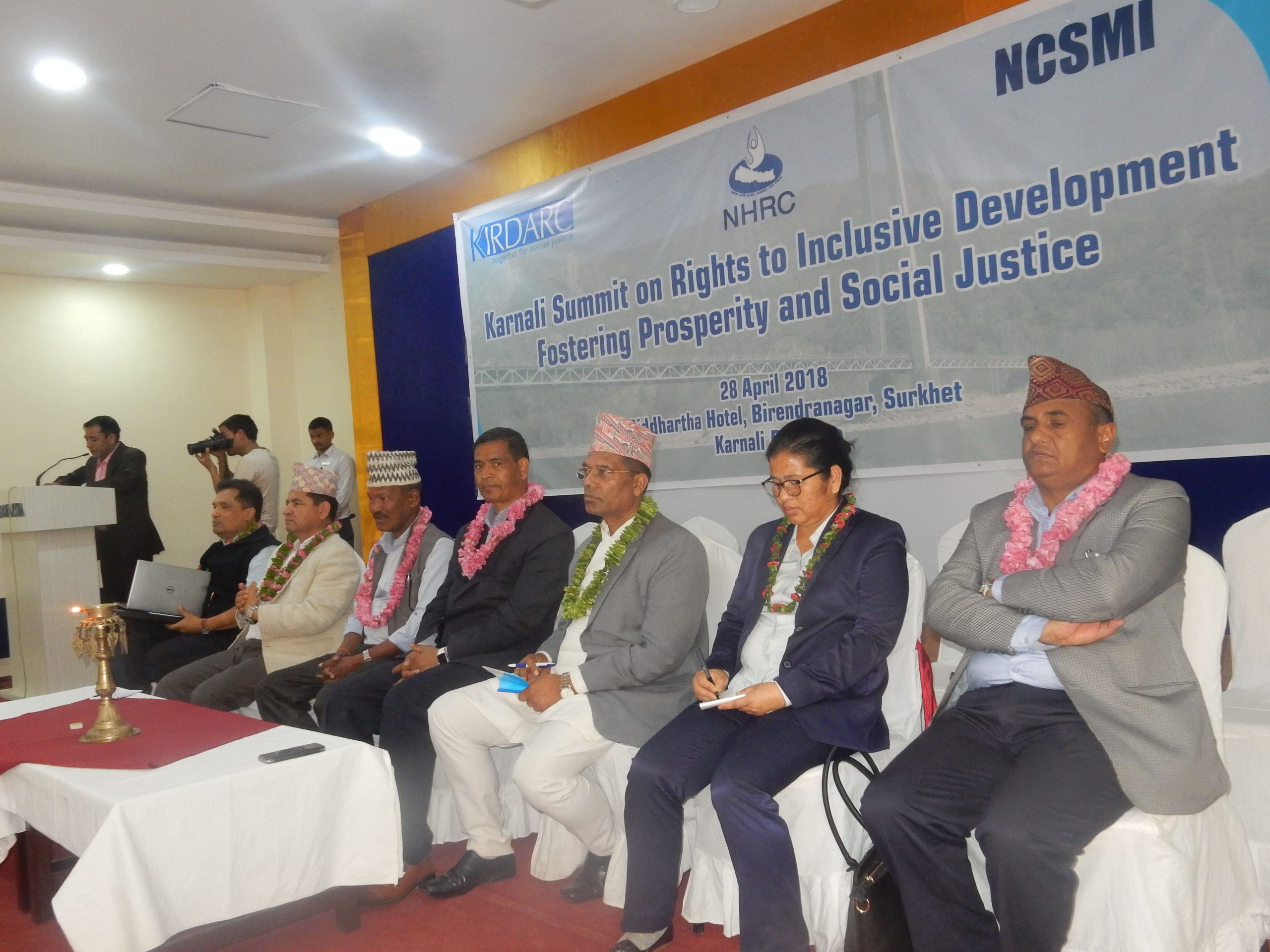 Mahendra Bahdur Shahi, Hon’ble Chief Minister of Karnali Province inaugurated the summit. He emphasized on existing disparities in the province as the province has been ignored in the mainstream development of the country since long. He further added for effective utilization of the natural resources and urged all stakeholders, government, civil societies and private sector for commitment and dedication for prosperous province. He informed that Province Government will support to I/NGOs that are effectively contributing in in the Province will be able to implement their programs/projects but with the effective monitoring and supervision of the Province Government will be ensured. Similarly, he expected upcoming long term plans and their execution modalities for the province in education, health and other infrastructures from private and non-government organization sectors will be supported by the province government.

In the program, Mr. Gauri Pradhan, Former Commissioner and Spokesperson of the National Human Rights Commission (NHRC) delivered the key note speech in the Summit. He presented overall socio-cultural, economic status including human rights and social justice scenario with regard to access, quality, and sustainability of basic necessities. He asserted strengthening local government with effective coordination from the province and federal governments for bringing inclusive development in the province. He presented visionary approach that could be assimilated by the province covering all sectors. Similarly, Murari Prasad Kharel, Regional Coordinator, NHRC Nepalgunj shared that status of human rights in the province concerning with principles of human rights which include social security, insurance, self-esteem, health, education, equality and non-discrimination, participation and inclusion, accountability and rule of law. Leader of the opposition of Karnali Province Parliament, Jivan Bahadur Shahi asserted that Karnali does not prosper only allocating budget rather best vision is required at first; in which, principles of 5 “Ba” forest (Ban), road (Bato), market (Bajar), electricity (Bidhut) and thoughts (Bichar) have to prioritized.

The Karnali Summit Declaration, 2018 include commitment on planning preparation, execution along with monitoring and evaluation for brining inclusive development, social justice through effective utilization of natural resources (medicinal herbs, hydro-electricity, tourism) so that Karnali Province could head towards prosperity; Federal, Provincial, Local Governments, experts, developmental organizations and other concerned stakeholders assimilating democratic principle, good governance, rule of law, assurance of human rights and accountability for the inclusive development and social justice in the province; following inclusive and social justice principles in preparing planning and implementing; respecting labour by eliminating all sorts of deprivation and social mal-practices; being constantly active to tackle climate change adverse effects and materialize ways of adaptation in development process and its achievements; Similarly, the declaration also called for the concerned stakeholders for contributing collaboratively for achieving social justice and inclusive development.

The program concluded to work consolidative way for ensuring rights to inclusive development for fostering prosperity and social justice by implementing the drafted declaration from the concerned stakeholders.